QUESTION 211
Refer to the exhibit:

An administrator is troubleshooting intermittent poor performance of virtual machines in a vSphere 6.x cluster. Investigating esxtop data shows that the only statistic that stands out is %CSTP as depicted in exhibit 1:

The administrator proceeds to switch to the Power Management screen and observes the data depicted in exhibit 2: 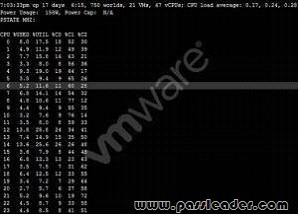 Based on the information in the exhibits, which two configurations are probable causes of the poor performance? (Choose two.)

QUESTION 212
An administrator has recently configured HA on a cluster. After reviewing the summary tab on one of the hosts, the warning in exhibit 1 is displayed:

The administrator then views the management network vSwitch as shown in exhibit 3:

Based on the exhibits, which two steps should be taken to ensure redundancy on the management network? (Choose two.)

A.    Move vmnic1 to Standby adapters.
B.    Add an additional vmknic to the Network Adapters and move it to Active adapters.
C.    Set the advanced HA configuration parameter das.ignoreRedundantNetWarning to True.
D.    Uncheck the Override Failover Checkbox on the management network port group.

QUESTION 213
Refer to the exhibit. The exhibit shows the status of vmhba32 and vmhba33 as Unbound.

What is a likely reason for this status?

QUESTION 214
Review the exhibit. An administrator has configured permissions for a group called VMGroup and a user named VMUser. A new Role has been created called PowerVM.

The group and role have these charecteristics:
– PowerVM role can power on VMs
– VMGroup granted PowerVM role on VMFolder
– VMUser is a member of VMGroup
– VMUser granted No Access on VMFolder
Based on the exhibit, which statement best explains why VMUser is denied access to the VMFolder?

QUESTION 215
Refer to the exhibit. An administrator would like to add Challenge Handshake Authentication Protocol (CHAP) to an iSCSI adapter. The administrator accesses the Storage Adapters menu as shown in the exhibit:

In which tab can the task be accomplished?

QUESTION 216
Refer to the exhibit. An administrator receives an error on a vSphere cluster as shown in the exhibit:

Based on the exhibit, which three configuration changes can resolve the error? (Choose three.)

A.    Change the Admission Control policy for the cluster.
B.    Adjust CPU and Memory reservations of the virtual machines.
C.    Increase the amount of failover resources in the cluster.
D.    Reconfigure the ESXi host cluster for High Availability.
E.    Disable Virtual Machine Monitoring.

QUESTION 217
Refer to the exhibit. An administrator manages a High Availability (HA)/Distributed Resource Scheduler (DRS)-enabled cluster and has configured the affinity rule shown in the exhibit:

Which two statements best describe the configuration shown in the exhibit? (Choose two.)

QUESTION 218
Refer to the exhibit. An administrator has configured a firewall rule as shown in the exhibit:

QUESTION 219
What is the highest object level from which a virtual machine can inherit privileges?

QUESTION 223
An administrator has configured three vCenter Servers and vRealize Orchestrator within a Platform Services Controller domain, and needs to grant a user privileges that span all environments. Which statement best describes how the administrator would accomplish this?

QUESTION 224
Which command shows the Physical Uplink status for a vmnic?

QUESTION 225
An administrator decides to change the root password for an ESXi 6.x host to comply with the company’s security policies. What are two ways that this can be accomplished? (Choose two.)

QUESTION 226
An administrator connects to an ESXi 6.x host console in order to shutdown the host. Which option in the Direct Console User Interface would perform this task?

QUESTION 227
An administrator is able to manage an ESXi 6.x host connected to vCenter Server using the vSphere Web Client but is unable to connect to the host directly. Which action should the administrator take to correct this behavior?

QUESTION 228
An administrator creates a custom ESXi firewall rule using an XML file, however the rules do not appear in the vSphere Web Client. Which action should the administrator take to correct the problem?

QUESTION 230
Your management has asked you to project your anticipated virtual machine storage needs over the next 18 months. Which technology would help provide the required information?

QUESTION 231
What is an availability challenge that vSphere can address?

A.    Virtual machines can be proactively migrated when a server failure is imminent
B.    Hardware maintenance can be performed at any time without application impact
C.    More servers can be deployed to provide higher availability
D.    Disaster recovery is greatly simplified

QUESTION 232
What are two benefits of datacenter virtualization? (Choose two.)

A.    Less data to back up
B.    Less CPU power required for a given application
C.    More efficient use of resources
D.    Same hardware footprint for every machine

QUESTION 233
Your company is planning to migrate your datacenter to a new location, but they wish to minimize downtime during the transition. You are entirely virtualized at your primary datacenter, and have been given funding to acquire new hardware for the new datacenter. Which of the following products can help you migrate the VMs to the new datacenter?

QUESTION 234
What is a feature of vSphere?

QUESTION 235
You are discussing virtual networking with a colleague. She asks you which type of virtual switch supports the advanced networking option called Port Mirroring. Which of the following is the correct answer?

QUESTION 236
An administrator notices that the time on an ESXi 6.x host is incorrect. Which two actions should the administrator take to correct this issue? (Choose two.)

A.    Modify the time for the host using the vSphere client.
B.    Correct the NTP settings in the /etc/ntp.conf file.
C.    Configure NTP from the Direct Console User Interface.
D.    Use the vicfg-ntp command from the vSphere Management Appliance.

QUESTION 239
Which three prerequisites must be in place prior to enabling secure boot for a virtual machine? (Choose three.)

QUESTION 240
Which two situations could cause a virtual machine to appear with (orphaned) appended to its name? (Choose two.)